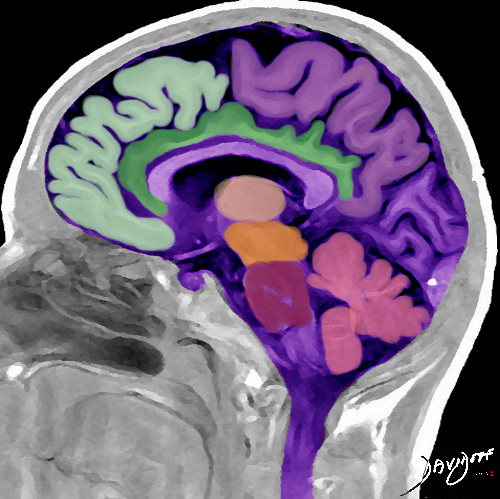 The brain is the main center that controls all that we do and is the center of the central nervous system. Without the brain one cannot live the life of a human being.

Structurally it is one of the largest organs in the body.  It is characterized by two hemispheres and four lobes that are composed of neurons, axons, and dendrites.

From a functional standpoint the brain is responsible for both the most basic and most complex of sensory and motor functions, while it is also responsible for homeostatic regulation and executive cognitive function. In general the frontal lobe is responsible for reasoning, and movement.  The parietal lobe is associated with perception of stimuli, recognition, orientation and movement. The temporal lobe controls smell, taste, hearing, and speech. The occipital lobe controls vision.  The midbrain contains both grey matter and white matter tracts and is responsible for modifying motor and sensory signals as well as being involved with the reticular activating system.  The pons has centers that are involved with sleep, some autonomic functions such as respiration and bladder control and with balance. The medulla has a major function in the autonomic system and helps to control respiration, blood pressure and heart rate. The major function of the cerebellum is in the control of balance and in muscle coordination.

Diagnostic procedures proceed from the all important history and physical examination, through EEG, CT, MRI, and functional PET scanning.

Treatment options depend on the disease but range from physical rehabilitation, surgery, conventional and advanced radiation techniques, medical therapy and chemotherapy. 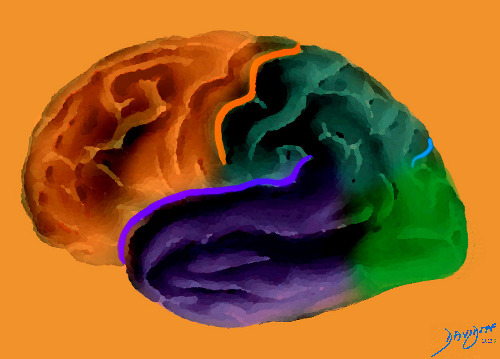 The brain, even  from the outside looks complex, despite the artistic attempt to create a homogeneous organ.   It has been a challenge and will continue to be a challenge for scholars and the lay public alike for years to come.

The brain is the most complex organ in the body, and the approach to understanding its structure must evolve from its most basic form that will stand as a foundation to the advancing complexity.  As such one approach to understanding its structure, is to start with stick diagrams that draw simple intuitive lines of the vectors or axes of the brain, in an attempt to conceptualize the many parts of the brain and how they fit together.

Looking at the brain from its lateral aspect is very different from looking at it from above or from front.  The sectional views in sagital axial and coronal projections add even more complexity as the vista of the structures changes every few mms.  Even with this method it is difficult to understand brain structure because one has to conceptualize these vectors from many angles.

We will start by providing simple conceptual diagrams of the brain from the side, from above and from the front Major Parts of the Brain

This artistic rendition of the brain reflects the vectors of the major parts of the brain with the stick diagram overlaid on a sagittal external view of the brain. In the stick diagram, the forebrain has now been divided into the frontal lobe (bright green), parietal lobe (light mauve) occipital lobe (purple) and temporal lobe (red). The midbrain is represented in orange, and the hind brain consists of the pons (pink) medulla (salmon) and the cerebellum (maroon) The Flower of the Brain in Blue

A CTA (CT angiogram) of the brain is combined with an CTA of the carotid arteries to form the image of the flower of the brain.

BrainTree is derived from an anatomical specimen of the brain.  The forebrain has been artistically rendered to create the leaves and branches of the tree.  The trunk and the roots extnd from the hind brain and the top of the spinal cord.

The following slide show is a collection of images of the brain.  Click on the image to advance forward