The noblest pleasure is the joy of understanding. (Leonardo da Vinci)

Understanding originates from the the old English word understandan, meaning “to grasp the idea of .”

It does not originate from the words stand and under, which would imply an overhanging burden .

Its origins are complex but ultimately mean  “stand in the midst of” or “to be close to.”

So in the pursuit of understanding, one needs to seek the feeling of being close to or even inside the concept, rather than be slave to it.

So How Does One Pursue Understanding?

Mapping is the spatial representations of complex concepts, starting with concepts that with well understood basic principles, and then branching out in in progressive small steps.  The Common Vein uses the imagery of a tree for spatial representation as in a tree of knowledge and also as a tree of understanding and enlightenment.  Implied are key elements of roots, trunk, and branches.

The trunk as a single element  reflects the central core concept one is trying to understand. The roots represent elemental principles which reflect the foundation of the concept.  They are inarguable black and white principles.  The  branches are the different states that may occur within a given environment and with time.  Both have have infinite divisions with progressive complexity.

These steps are shown diagrammatically below;

1a. Identify the word or concept that you need to understand 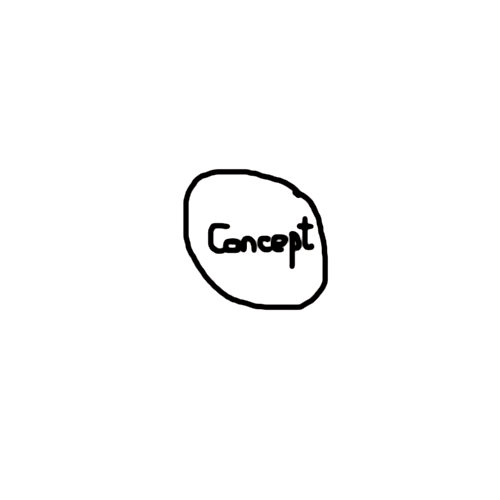 1b. Identify root elements or principles 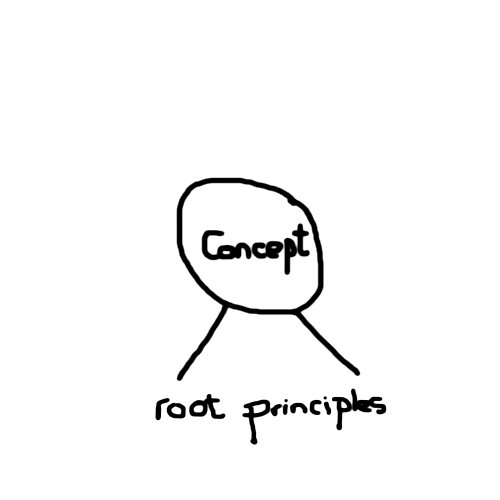 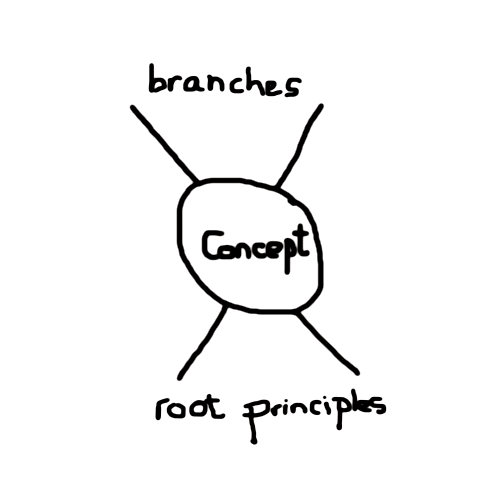 The first step in understanding is to identify in a word or two, what needs to be understood.  Let us use the “body” as an example, since this was the complexity I needed to understand as I entered medical school and is responsible for The Common Vein methodology. Of course the issue needing comprehension may be any of the other infinite numbers of issues that we need to understand; love, hate, energy, atom, universe, hunger, or endometriosis for example.

In trying to understand the body, one is initially confronted by a myriad of complex subjects and issues. 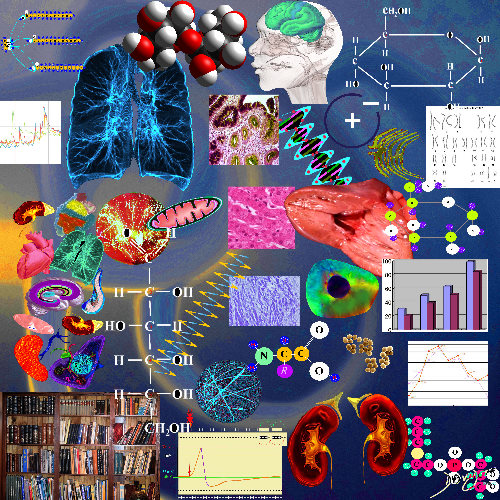 How to choose which are the “major” parts or categories

In the introduction to  The Common Vein, we proposed that everything in the world was made of parts that organized and bonded together to make a new whole.

Essential to a living body are both structural and functional parts that are bonded by a variety of mechanisms  to create a living being.

“Structure”,  “function”, and the “bonds” that connect them,  therefore would be well chosen root principal elements of the body.  These same root principles would be applicable to any branch of biology, zoology or botany – i.e. any of the life sciences. 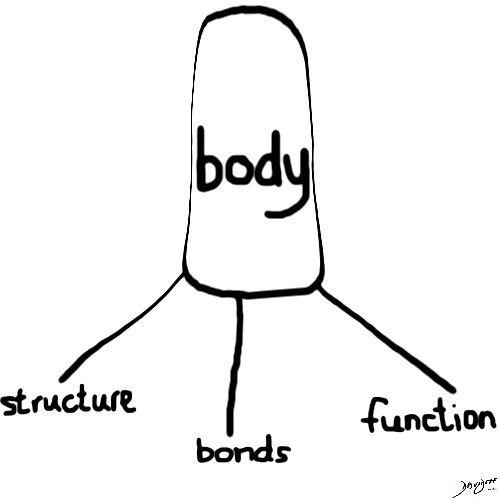 Equations are also a good graphic mechanism for some in learning and understanding . An equivalent equation for the diagram would there fore be;

Step 1c. What About the Branches of the Body?

This requires some thought, but in general it is always safe to assume that there are two basic states  for most situations.  One state, is a thumbs up state, meaning  “order”, or health, and the other a thumbs down state, meaning “disorder” or disease. These are inarguable principles and once again are universal to almost any situation. 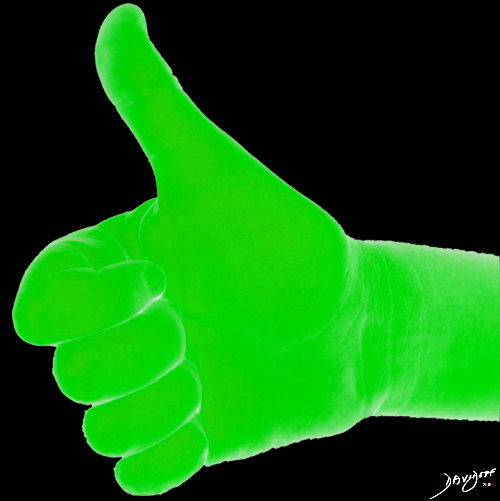 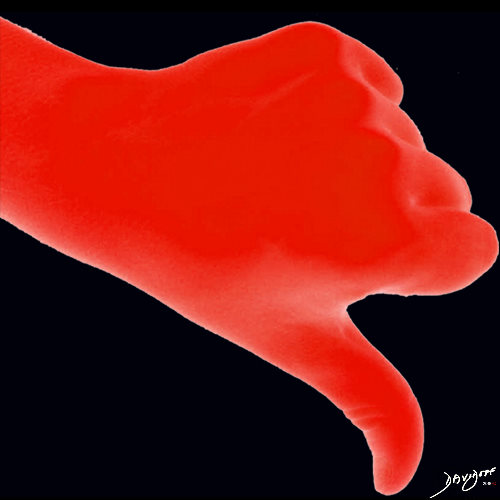 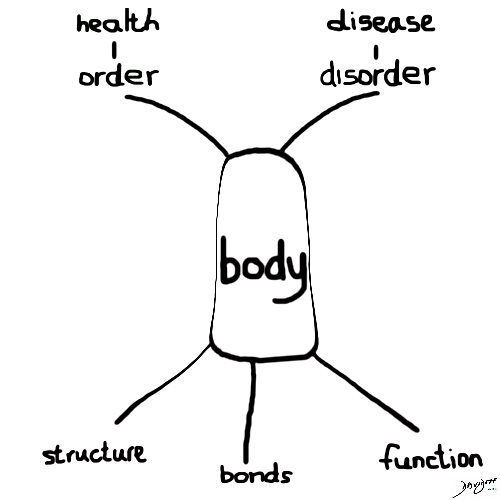 There is more probing to be done, but the foundation has been solidified with true principles.  From the chaos of the books on the floor of the disorganized library for example, we have built the first solid shelves of organized thought.  Ongoing exploration would be related to the parts of parts, variety of bonds, states of order and disorder, environment, time, and space .

So we are now back to the project of trying to understand the body after defining its most basic elemental parts and bonds, and we can now give thought  to the second step of understanding; parallel examples of problematic, and difficult to understand concepts.

In the introduction to this section on  understanding we  learned the the etymology of the word understanding was complex but ultimately meant “to stand in the midst of” or “to be close to.”

An exercise in understanding in order to enable the knowledge or concept to “stand within us”, is to try and find similar or parallel examples that we  already understand.

The Body and the City

The city is a complex collection of people, shops, garbage trucks, traffic lights and noise.

In the same way that the body has structural parts such as the organs and systems, the city has neighborhoods, suburbs and villages.  The functional parts of the body  create and process products for use, and the city has factories that create and process products for use by the population. The structural  and functional elements in the body are linked by vessels and ducts, while in the city they are linked by roads and railways.

The state of the city is either in order or disorder, and it is the function and need of the society of the city to bring things back to order.

Seeking other perspectives means looking at the same thing from a different viewpoint.

“..the more eyes, different eyes, we can use to observe one thing, the more complete will our “concept” of this thing, our “objectivity,” be.

Our society has been, and always will be enthralled by the body. There are innumerable ways we can and will seek the multifaceted perspectives of the body.  In the end we can only marvel at it’s miracle.  See The Body

Barbara Oakley TED talk How to Learn – Changing Ones Brain

Politics is for the present, but an equation is for eternity. Albert Einstein


It is Not Death


Cell as a City