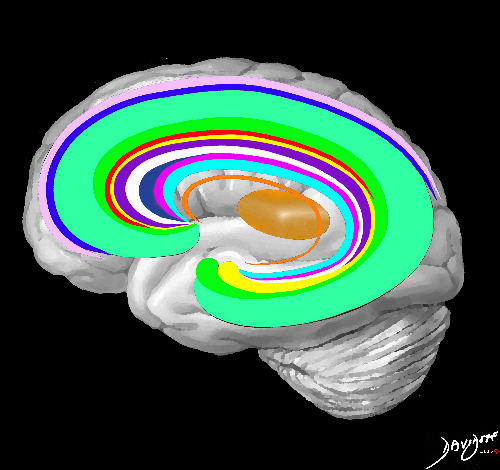 This section is written in a specific format to conform to the principles outlined for each of the organs.

Each structure though a unique biological unit, is part of a system that is bigger and more powerful than itself.  The brain has to be connected to the other organs and systems in order to survive.

The most basic of physiologic principles of receiving, processing, and then exporting the result is the hallmark of neurological function and in fact the hall mark of all function.  From the simple knee jerk reflex at spinal level to the most complex of brain functions of expressions of thought and creativity – this principle holds true. 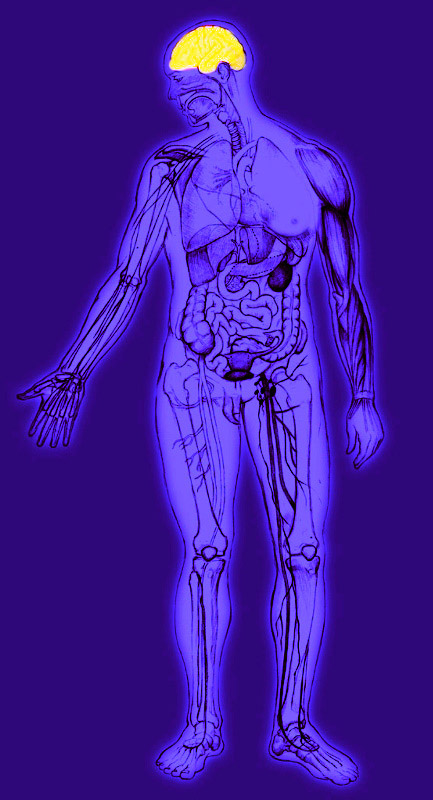 The Gold Dome that Tops Them All

The brain is the structurally and functionally the crowning glory of the human body. It sits on high in the loftiest position of the body, snugly within the cranial vault. body icon brain head body organs normal anatomy

The cell is the most basic biological unit and it combines with other cells to form organs systems and eventually a body and mind and thus a person.  Each organ takes on an essential role and one of the major roles of the brain is to control the function of other structures to enable the system to run smoothly – its executive function.The towns and cities in which we live are macrocosms of our bodies and follow similar principles of building small to large.  In turn the controlling system of our towns, cities, and countries is our government.

The Gold Dome of the State House of Massachusetts – Central Control

Within the skyline of the city of Boston there is a small gold dome of the government center which control all the activities of the city and of the state.  Functions such as protection, support, transport, storage, and growth which are basic functions of physiology are found in the departments  of police, fire, health, transport, and education.  The brain depicted in the right image has similar executive function in the body, and participates in all walks of life including protection, support, transport, storage and growth, by controlling sensory and motor function, the flow of body fluids via the autonomic system, and metabolic function and growth through the pituitary and endocrine function.

The brain is a solid organ consisting of billions of cells that link and interconnect with sensory organs, structures of higher cognitive and executive function, and structures that enable motor function.As Biological Unit

The brain is intimately connected to all tissues and cells of the body whether it is by direct neurological contact or via metabolic or hormonal pathways.  The somatic sensory system, visceral sensory system, the sensory cranial nerves, and the metabolic hormonal feedback pathways  particpate in presenting information to the brain via a variety of pathways.  Involunatry pathways of control such as the autonomic nervous system, endocrine system execute “automatic” control to enable smooth maintenance of vital functions of life, while higher  executive function such as cognition, perception, memory, comprehension, emotion, creativity and decision making have a more concious involvement that will result in executing action.  On the motor side, the somatic and  autonomic systems, cranial nerves , and endocrine system controlled by the pituitary, effect the processes by controlling muscle movement and secretory behaviour.

The concept of units to unity reflects the importance of each unit within the system being an important part of something larger.  The brain is part of the nervous system, which in turn is part of every system in the body.  It cannot function in isolation and needs other components of the body to survive and thrive.  It is composed of the peripheral nervous system and autonomic nervous system that bring and take information to the organs via electrical transmission of information, but also is an integral part of the endocrine system.  It is a vital organ.

The brain cannot function alone and requires centrally based innervations and signaling to integrate function.  Although it has extreme powers it cannot survive and thrive without the support, protection and maintenace provided by other systems such as the cardiovascular system, respiratory system, gastrointestinal system, genitourinary system, and musculoskeletal system.

The brain arises from the primitive ectoderm which evolves into the neural tube.  The most anterior part of the neural tube expands rapidly to become the brain and the remaining portion evolves into the soinal cord and nerves.  The proliferating cells of the developing brain differentiate into neurons (function to receive and transmit vital information) and glial cells which act as support and protection for the neurons.  The neurons migrate and evolve and further differentiate into functional units distributed in various parts of the brain but remain intimately connected with other neurons.

The process called neurogenesis populates the prenatal brain with billions of cells, which is then followed by programmed cell death to prune the brain population.  During adolescence synaptic pruning takes place which promotes the optimization of higher quality synapses and removing lower quality synapses.  It has been compared to a “weeding” process. Brain aging in the elderly is natural but does lead to a variety of incapacitating disoders such as Alzheimers disease, Parkinson’s disease, amyotrophic lateral sclerosis and cerebrovascular disorders.

Forces that relate to brain  function are electro chemical  in origin.  Sensory stimuli are converted into electrical signals which are  transported along the nerves .  At the synapse, the electrical signal is converted back to a chemical signal , and then reconverted into an electrical signal.  Through the integration with multiple sites in the brain with recurring electrochemical forces, the effernt system is activated and the signals carried along the nerves again via electrochemical mechanisms.  These elctrochemical mechanisms are intimately involved with the endocrine system where the forces at the end organs are chemically induced.

The interactions of the brain with the rest of the body is complex but simple principles prevail.  The brain gathers information about all the organs through the sensory system, and is therefore in touch with the multicentric needs of each organ and the body as a whole, is assisted by the autonomic system that provides subconcious and automatic control of vital and even non vital body functions.  The innumerable parts of the brain each with specific function are intimately connected with each other and higher executive and concious decisions enable prudent execution of the the two most basic functions of the body:  contraction and secretion. In so doing basic metabolic needs, protective and supportive needs,  mobility, transport of fluids, oxygenn and carbon dioxide for example, are integrated with a goal toward homeostassis.

The brain responds in  milliseconds to needs of the body, balancing  local needs with systemic needs, during all and any physiologic process.

States of Being  Health and Disease

Ischemic and degenerative diseases are the most common maladies of the brain.  Because the function of one part of the system is so intimately related to other parts, if one link in the chain of synapses and connections is weak or damaged the whole system fails.

Sometimes the disease affects the sensory side, sometimes predominantly the centrall executive function and sometimes motor function is dominantly affected.

When neural functions have been reduced to levels where function is impaired, the range of therapies are quite limited.  Physical rehabilitational therapy is the mainstay of many ailments of the nervous system

Dowling How the Brain Works